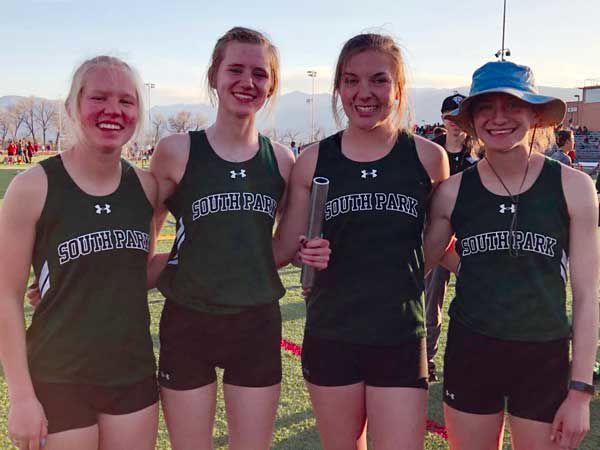 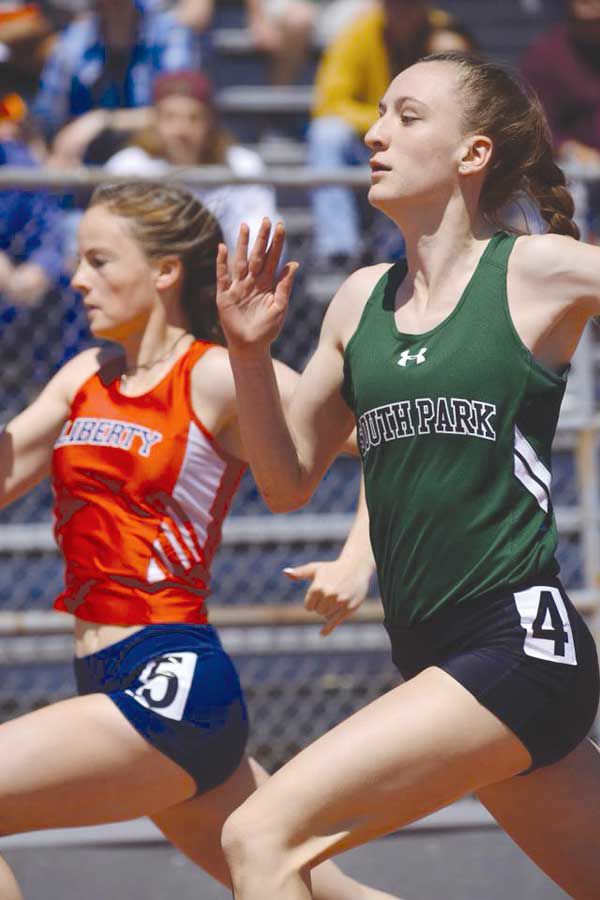 South Park freshman Jordan Burnett hits a milestone and breaks the 100 meter dash South Park High School record at the Coronado Cougar Classic Apr. 27. Burnett made the books by beating the previous time of 12.97 with a bounding time of 12.84.

South Park freshman Jordan Burnett hits a milestone and breaks the 100 meter dash South Park High School record at the Coronado Cougar Classic Apr. 27. Burnett made the books by beating the previous time of 12.97 with a bounding time of 12.84.

They may be small in numbers, but the South Park girls’ track team is definitely mighty. Sprinting their way to distinction, the four-member team has left their mark at South Park High School by breaking two school records in a single meet.

“We had a fantastic meet in Colorado Springs. We just couldn’t have asked for better results,” head Coach Joe Wedow said.

Taking on the Coronado Cougar Classic held at Garry Berry Stadium April 27, the 800 meter sprint medley relay team bound together to make history with a time of 1:56.71, beating the previous record set in 2012 by Kacey Buttrick, Emma Naylor, Sarah Saleck and Elsa Martinez.

Put together by the usual suspects, senior Sara Naylor came out of the blocks and handed to Caroline Carpenter for the second 100 meter leg. The senior then passed to freshman Jordan Burnett for the 200 meters and junior Morgan Burnett finished the race with the 400 meter stretch. The quad surpassed the previous school record of 1:57.37, placing them at number 12 in this year’s class 2A state rankings.

“The girls had a fantastic race, knocked a lot of time off their season-best, and broke the school record by quite a bit as well. The big problem with that is that we have some kids with other obligations, so they won’t have a chance to run the event again until the state meet,” Wedow said.

Besides their renowned time, the Medley relay team was able to place fifth at the meet, beating 19 teams in competition, and earned four points toward the team total.

Upping the ante and capturing the hot-seat as an individual competitor, freshman Jordan Burnett has captivated her coaches and fans alike, setting multiple season-best records and placing within the top performances throughout the season.

But the 15-year-old outstripped all previous efforts by breaking the 100 meter dash school record of 12.97 set by Emma Naylor in 2014. Burnett’s time of 12.84 tied with Alexi Bettinger of Liberty High School out of 90 sprinters during the preliminary round of the Cougar Classic, and the time presently sits sixth on the state leader board. The freshman went on to place sixth overall in the final round with a time of 13.32.

“Jordan first ran and set the school record in the 100 meter dash, then ran the Medley, and finally had about five minutes before she had to turn around and run the finals for the 100 meter dash, not giving her a whole lot of time between events and she still managed to break records,” Wedow said.

Later that day, the fully-engaged athlete also ran a season-best record of 26.83 to seed seventh out of 83 runners during the preliminary round of the 200 meter dash.

The time bumped Burnett to sitting seventh in the state ranks. Running among six competitors, Burnett then placed fifth overall in the final round with a time of 26.90. Her season-best time lacks a faint .14-second split from matching the school record set in 2014.

“Jordan turned in fantastic times in both of her 200 races and was just slightly off from reaching her new season-best during the final round,” Wedow said.

In addition to the successes seen at the Coronado Cougar Classic, the Burro team was able to surface with 16 season-best records throughout the day.

“Sixteen season-bests rolling in at this time of year is good news. This means that the kids are getting into shape and peaking right when they need to be,” Wedow said.

“The 4x200 had a great race and knocked about one-and-a-third second off of their time. Unfortunately, it’s that time of year where everybody is improving, so although they improved their time by quite a bit, they still aren’t in the top 18. It’s disappointing, but they are going to continue to run and hopefully knock more time off of that,” Wedow said.

On the girls’ side, Sara Naylor was able to set a season-best record of 29.00 in the 200 meter dash to place 32nd out of 83 sprinters during the preliminary round.

“Sara is finally feeling strong after a calf injury that has been binding her up this season and is coming back into her events. It’s nice to have her times getting back down to where she left off last year, which is all fantastic to see,” Wedow said.

Having three female events score during the final round for a total of 11 points, the Lady Burros were able to finish tied for 21st place with Simla High School out of 30 scoring teams.

Achievements continued to roll through to the following week, where the girls’ team was able to pick up eight points to finish 16th out of 21 teams participating in the Denver North Viking Invitational May 4.

Hosted at the All-City Stadium in Denver, the boys’ team scored in seven events to total 25 points and tied with Thomas Jefferson High School at 10th place.

“Again, the kids are continuing to have season-best performances. We had fewer kids attend, and with a total of 10 kids we still picked up 17 season-best records,” Wedow said.

Holding the high end on the boys’ side, Tucker McDowell was able to earn 17 points throughout the day by placing in the top eight in three events. The senior highlighted with a second-place finish in the 300 meter hurdles with a season-best time of 42.17. Beating 15 other hurdlers, McDowell was able to earn eight points for his efforts and currently resides in the number nine position in the state standings.

“Tucker just continues to have season-best times in the 300 meter hurdles, and he’s within about a second from reaching the school record now,” Wedow said.

McDowell then returned to take the bronze medal in the boys’ triple jump with a season-best distance of 41-01.50, to earn another six points toward the team total and advanced to the number four hole in the state standings. He finally wrapped up the day with a sixth place finish out of 16 competitors in the 110 meter hurdles.

Stopping the clock in a time of 16.50, McDowell summed up with his final three points and is sitting eighth in the state standings with his time of 16.31, set at the Pomona Invitational April 13.

“Tucker is peaking at exactly the right time, and I’m excited to see what he has in store for us,” Wedow said.

Saddling up and obtaining five points for his team in two events, Riley Elliot jumped in to take a season-best distance of 36-02.00 in the triple jump. In a pool of 15 competitors, the senior was able to place sixth overall and earned three points toward the team total.

His actions continued to speak volumes as he and teammate Michael Kelley were found in a three-way tie with Klary James of Denver West for sixth place in the high jump competition.

Although Elliot’s season highlight held from the previous week, Kelley was able to set a season-best record at 5-04.00 and the trio were each awarded two points.

The boys’ assault ended with an eighth-place finish from the 4x800 meter relay team. Setting a season-best time of 10:06.33, the squad earned a point for their efforts.

Calculating the entire figure for the girls’ team, Morgan Burnett took a third-place finish in the 800 meter run and a seventh-place finish in the 400 meter dash. Outrunning 22 competitors in her middle distance event, the junior set a personal best time of 2:31.40 and earned six points toward the team total.

“Morgan knocked a ton of time off of her personal best and moved into the top 18. Bettering her season-best from a week ago, she jumped from 33rd place to 13th place in the state standings, but of course with the ever-changing boards, has already been moved again since she posted that time,” Wedow said.

According to maxpreps.com, Burnett is currently ranked 16th in the state standings.

Positioning in the top eight of the 400 meter dash, Burnett set her second season-best time of the day with a time of 1:04.14 and was rewarded with her final two points. The time has her inching toward the leader board, and he is currently ranked number 26 in the state.

“Morgan is another athlete that is peaking at exactly the right time, and I feel that she still has more in her before the state meet,” Wedow said.

The South Park Track and Field team will move on the attack in their final regular season meet when attending the Monte Vista High School Last Chance Meet May 12.

The contest will consist of approximately 23 teams fighting for the opportunity to advance into the top 18 ranks and a chance to move forward to the Colorado State Championships held at Jeffco Stadium May 17-19.

“We’ve got a ton of kids peaking at the right time, evidence with all of the season-bests set in the past couple of weeks, so hopefully, that will continue to roll through to the Last Chance Meet and the state meet as well,” Wedow said.