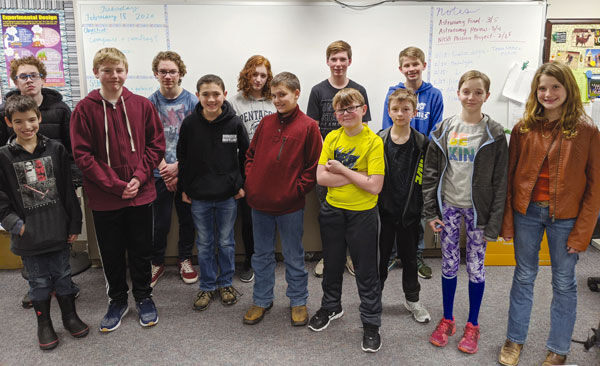 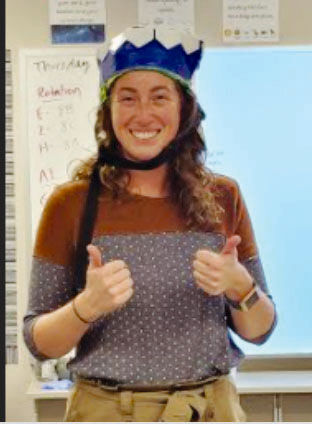 Kristine Helsper, a science teacher at Fitzsimmons Middle School in Bailey, noticed that NASA was sponsoring a contest for students. The contest, entitled “NASA Wear Challenge,” entailed coming up with ideas for space travel clothing for astronauts that would protect them from the harmful impacts of radiation

“The kids were excited about the project from the beginning,” Helsper said. “It was a group with very diverse interests, but they did a great job of collaborating, listening to one another and eventually agreeing on a specific idea.”

That idea was protective headgear designed to repel the effects of radiation by combing two layers of material; a foam layer of polyester/polyethylene, and a harder, helmet-like layer which the students fondly named “Megamind.”

The contest began in January of 2020, at which time 66 teams of students nationwide presented their original ideas to NASA scientists. The top 15 teams were asked to actually create prototypes to present to NASA for further consideration, and Helsper’s students were among them.

Finishing in the top 15 earned Helsper’s students the opportunity to produce a technical review and presentation to be delivered virtually to NASA scientists by the end of October.

“We didn’t have long to get the technical review and presentation together, and they were pretty nervous about making the presentation to real NASA scientists,” Helsper said. “But they did a terrific job.”

The NASA scientists obviously shared that sentiment because, Helsper’s students ultimately garnered a top 10 finish in the challenge. That top 10 finish was obviously a point of pride for Helsper and her students, but for Helsper, the real thrill was seeing her students interested and engaged in a hands-on project that covered much of the same material they had been studying in class.

“It was rewarding to see their interest and their collaboration, and it was a project that brought chemistry, physics and astronomy together very nicely, and those are three classes I teach,” Helsper said.

The prototype presented to NASA was not only protective and practical, but also had a multi-functional dimension and doubled as a fanny pack.

Helsper said it was the first time she had entered her students in an extracurricular activity of that kind, but that she would gladly do it again if the opportunity arose.

“I believe the best way to prepare students for future challenges is to provide them with hands-on learning opportunities,” Helsper said. “For the students who stuck it out until the end, it was really a once in a lifetime opportunity.”

About 20 students contributed to the project, but Helsper said a core of about seven students were primarily responsible for the bulk of the work. To the credit of Helsper and her students, the group’s opportunities to work face-to-face was severely hampered at times due to COVID-19, but they forged ahead and still managed to collaborate effectively en route to their top 10 finish.

The Platte Canyon School District, under the direction of Superintendent Mike Schmidt, has shown a willingness to let its students participate in a variety of unique extra-curricular projects in recent years.

High school students in 2018 competed and surpassed all expectations in the  SEVENTY48 boat race in Port Townsend, Wash. The boat used in that competition was constructed by students, on campus, in the PCHS shop room.

The group also started the Platte Canyon High School Yacht Club, built another boat and was planning to compete again, but COVID-19 concerns have prevented them from moving forward with those plans.

Deer Creek Elementary School also recently constructed a state-of-the-art greenhouse that has spawned a great deal of interest and has paved the way for a variety of unique educational opportunities for its students.