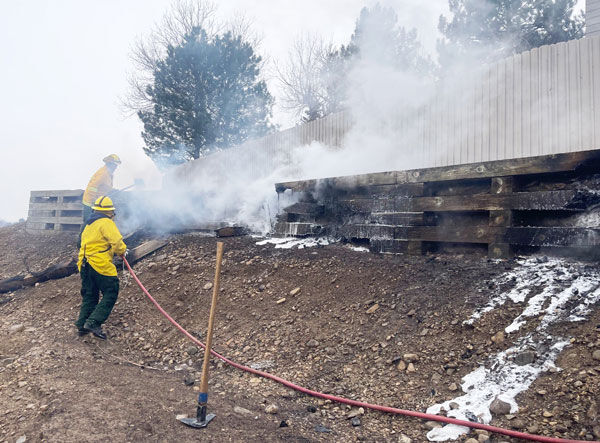 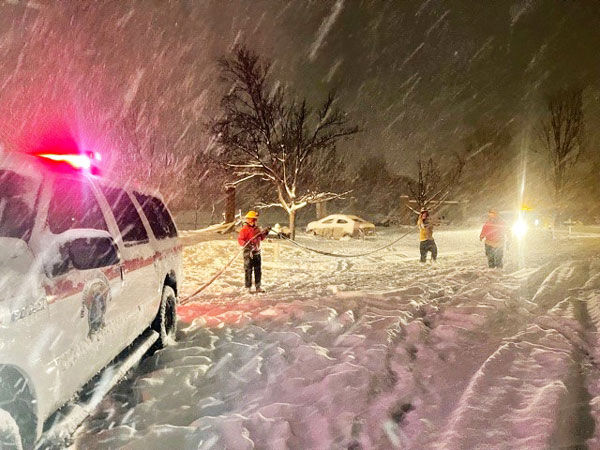 Training as a volunteer firefighter is difficult because of the very nature of the business. It’s been said that “no two calls are the same,” and one never knows what challenges each new day will bring.

Four members of Florissant Fire Protection District recently underwent some very intense training while responding to an assist with the Marshall and Middle Fork Fires in Boulder County.

“It was literally like training under fire, or into fire,” said Kari Spicer, who has been on FFPD for two years.

The team was led by Captain Michael Bukowski, who was notified by Chief Mike Bailey of the Surge request of Colorado Division of Fire Prevention and Control. A message was sent to the firefighters to see who would be available, and three responded: Spicer, Chris Walters, and Cindy Sebring. The four set out to Boulder County at 6 a.m., Dec. 31.

The Wildland fire began the afternoon of Dec. 29, and due to high winds, rapidly escalated into urban areas. Walters, a retired Podiatry Surgeon who is part-time with South West Teller County EMS, joined FFPD last summer.

And although Walters has been on several Wildland fires, “this one was extensive, urban, and devastating,” he said.

Walters explained that there were many different agencies which had responded from Colorado, and even other states. He credits Captain Bukowski for his efforts, stating, “Mike is a very impressive young man and a good leader.”

“I felt sorry for the people who lost their homes, but I was grateful I was able to help out,” she said.

Bukowski, who has been interested in forestry work since high school, decided to pursue firefighting along with his forestry and excavation business after his experience with the Waldo Canyon Fire. He was evacuated from his home, but the home only suffered smoke damage. He joined FFPD in 2015 and got to the rank of Lieutenant. He was later promoted to Captain.

Bukowski explained the dynamics of this fire as an Urban Wildland Interface Fire that increased rapidly due to high winds. He explained there was significant natural fuel that interacted with structures. He said it was like a mosaic pattern of different structures, various building components, and other variables that caused the fire to escalate into the urban areas.

The winds carried the embers and burning ash and distributed the fire indiscriminately. With the high winds, aircraft use and retardant were unavailable for use and there was no way to stop it.

“When we arrived on Friday, the wildland aspect was out, but structures were burning and we were assigned to finding and extinguishing hot spots along the fire path,” he said.

In speaking with the firefighters, it was clear they all gained valuable experience and learned about several different types of fire situations. But it was a difficult way to learn. The experience is one of value, but it was difficult to meet with the people who were in such a traumatic state.

Spicer told of seeing piles of what looked like brown sand in places that was the ash from parts of the grass that had burned and been blown away. “We would dig through it and find fire under the ashes; one guy’s driveway was covered with it,” she explained.

Bukowski called the experience difficult, but rewarding at the same time. He also said this fire was the most destructive in Colorado history.

“We need to get in the mindset that there is no longer a fire season in Colorado,” Bukowski said. “It’s a threat year-round and we need to be as prepared and ready as possible.”