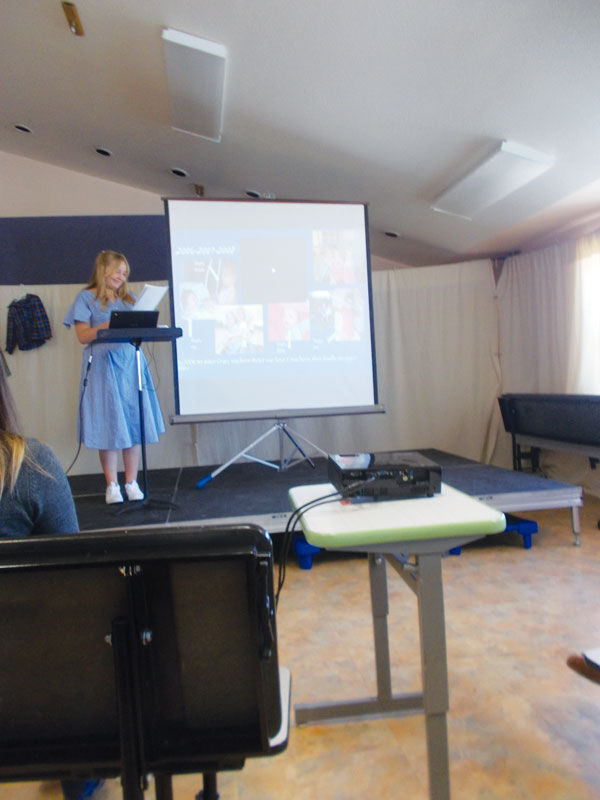 Eighth grader Kathy Grosch during her presentation May 20. (Photo by Flip Boettcher/The Flume) 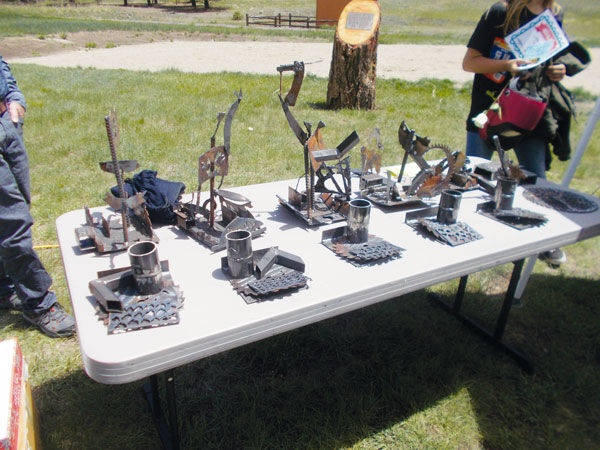 The “ship of life” projects the middle school welding students made during their welding elective class at the Guffey Garage with Bill Soux and Ken Walker. (Photo by Flip Boettcher/The Flume)

Eighth grader Kathy Grosch during her presentation May 20. (Photo by Flip Boettcher/The Flume)

The “ship of life” projects the middle school welding students made during their welding elective class at the Guffey Garage with Bill Soux and Ken Walker. (Photo by Flip Boettcher/The Flume)

Guffey Community Charter School is one of a handful throughout the state that has had in-person learning for the entire school year, starting the end of August and ending the first in June. Being small and rural was helpful, but the students were a big part, too.

After spending several months last year with on-line learning, the students were eager to return to the classroom, doing what was necessary to make that happen. Everyone wore masks while in the building, including the community volunteers; the students had Plexiglas desk separations in the classrooms which they decorated; and everyone stayed with their own cohorts, except while outside. There were no school or community events.

Katy Grosch, the graduating student, gave her eighth grade oral presentation May 20. Grosch worked on her presentation for the entire school year. It includes an autobiography, career research project, volunteer and community work.

Thinking about a career as a seamstress, Grosch researched that job. She designed and made the dress she wore at the presentation. Grosch milked a cow, learned to drive, worked and put in 96 volunteer hours during the year.

After all was said and done, Grosch decided she might like to be a seamstress as a hobby, not a job. She likes making clothes, but she really likes welding better. Grosch said that online learning was hard and in-person was better, except for the horrible masks. Grosch will be going to Canon City for high school next year.

June 3 was the school’s awards celebration and graduation. It was held outside under a huge open tent with more that 45 people plus staff and students attending. The school provided hamburgers, hot dogs and fixings. The community provided potluck.

School Principal Martine Walker said that even with COVID restrictions, the school had a successful Halloween Parade, Easter Egg Hunt, the students still made the fundraising fire starters, the students wrote and sent local veterans cards for the Veterans Day program and they had their Christmas party with Toys for Tots. The community was very supportive and the school got lots of donations this year, said Walker.

Walker acknowledged and thanked the nine classroom volunteers and Rita Mick at the library. She also thanked the other staff who keep the school going, maintenance man, bus driver and chef for lunch (that’s just one person), as well as the custodian and bookkeeper.

Each teacher presented awards to each of their students and School Board Of Directors President Frank Ruvo presented gifts to the teaching staff and Principal Walker.

Their project for the class was to design and make their “ship of life.” Dylan got a Guffey Garage hoodie for being the most improved welder and Abby Grosch got a welding helmet as first place for her “ship of life.”

Eighth grade graduate Katy Grosch handed out roses to people who helped her this year and received her diploma.

Food and refreshments followed the ceremonies.

The school has been in the same building for 103 years. Of course there have been additions and modifications over the years, but the same school bell still rings at the start and end of each school day.

In 1918, joint school district #49 was formed between Fremont and Park Counties and a school board of directors was elected. A one-time-only levy tax of seven mills was voted in for the purpose of selecting and buying a site for the Guffey School, constructing the school, and furnishing it. Lots #1, 18, 19 and 20 in block 18 were purchased.

Two contractors from Cripple Creek, J.C. “Hawkie” Harker and his father, had the lowest bid of $3,790, and were selected to build the schoolhouse. They re-used lumber from some old buildings in Guffey and from some buildings the county donated, which they tore down.

Unfortunately, because of World War I, the cost of building materials almost doubled and the school could not be completed at its first estimated cost, so the board decided to complete only three rooms, leaving the exterior, the hall and the water unfinished.

By September, the three rooms were complete and two teachers were hired, but the school had to close from early October to early December because of the Spanish flu epidemic. The school finally re-opened in December and hired a third teacher.

In 1996 the Park County RE-2 school board approved funds for a district charter school with two operating sites, Lake George and Guffey, which were to start in the fall.

Also in the fall of 1996, a 4,500 square foot addition was started on the south side of the old schoolhouse. The addition includes a multi-purpose room, offices and a kitchen upstairs, two bathrooms on the original school level, and two classrooms downstairs.

By 1999 the two schools, Lake George and Guffey, decided to split, and each become a separate charter school. The Guffey School became GCCS.

The school thrives on donations and fundraisers, and in 2010, then-school Principal Pam Moore started the first annual Pie Palooza, a pie contest, pie auction and melodrama. The Pie Palooza soon became the school’s biggest fundraiser of the year and over the past 10 years has raised about $57,000 for the school.

In 2011, the roof on the original building began to sag and had to be replaced. The entire roof was torn off and the 93-year-old beams, rafters and roof decking were replaced. The two old chimneys were taken down below the new roofline, and the old handpump-filled water tank was removed.

By 2013 lack of communication and broadband internet service earned Guffey the title of the most underserved area in Park County. With no broadband internet, the school could not use many of the educational resources and state-imposed testing that required high speed internet.

With several county grants, private grants, in-kind donations, much community support, and Moore Lumber and Hardware, the moving force behind the broadband project, the school purchased 20 acres east of the school in 2014. This property features the highest point in Guffey with line-of-sight to South Park Telephone’s high speed internet tower on Dick’s Peak.

The school built the access road to the top, erected the distribution pole to house the antenna, built the solar power system and storage building to power the whole system, thus bringing high speed internet to the school and some spots in Guffey. The school’s high speed, broadband internet system went live September 30, 2014.

With the old school bus constantly breaking down and in need of repairs, school Principal Martine Walker started pursuing the purchase of a new school bus. With proceeds from a record-breaking Pie Palooza, matching donations, grants and community donations, a new $64,759 school bus was purchased in 2019.

The “community” in Guffey Community Charter School really means community. Over the years the school has been a center of the community. Community members volunteer teaching, tutoring and mentoring students and the school sponsors many community events and programs.

Congratulations to Guffey Community Charter School on a great year. The community and the school are looking forward to programs and events next school year, which will be Walker’s fifth year as school administrator and principal.

With 20 - 30 average school students, about 30 people living in Guffey town, and 300 - 400 people in the surrounding area, Guffey is a remarkable community and the GCCS is truly the little school that can.