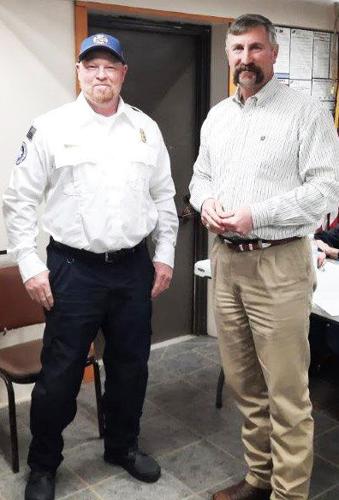 New Fire Chief Aric Stahly, on the left with Board of Directors Chairman, Kenny Thomas, after being sworn in and receiving his new badge. 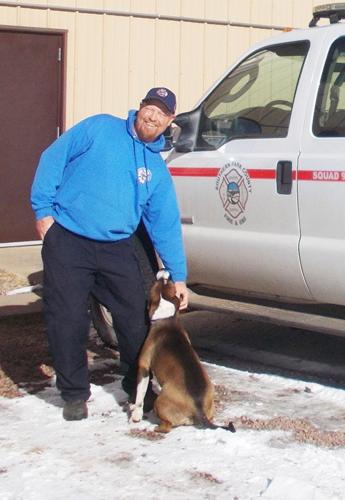 responds in to calls. Kate has become the station mascot.

New Fire Chief Aric Stahly, on the left with Board of Directors Chairman, Kenny Thomas, after being sworn in and receiving his new badge.

responds in to calls. Kate has become the station mascot.

The reins were formally passed from outgoing Chief Eugene Farmer, to the incoming Chief Aric “Red” Stahly at the January 6 board of directors meeting where Stahly got his new badge pinned on by board of director chairman Kenny Thomas.

Essentially the two are swapping positions at the fire department. Farmer is stepping down to Deputy Chief, and Stahly is stepping up to Chief.

Farmer will remain part time for a year to insure a smooth transition; he will work two paid days and a swing day each week, he said. Stahly is grateful that Farmer’s experience and expertise will be there for the first part of his tenure, he said.

Stahly came to Colorado from Michigan in 1996 and moved to Guffey in 2016. He joined the fire department in 2017. Stahly attended fire academy at Netco and took EMT school at UPRAD, both in Woodland Park. Stahly earned certifications as a Firefighter 1, Hazmat Operations and EMT.

Farmer’s interest in the fire department started when his family bought him a 100 foot ladder truck, he said. He would display the flag from the top for 4th of July at the station.

Farmer joined the fire department in 2014 and became chief in 2016. Farmer is a retired U.S. Navy Chief with 21 years of service. In his seven years with the department, the largest fire they ever had was eight acres. The idea is to keep them small.

Since being chief, Farmer has accomplished a great deal. Farmer got a new fire hydrant and water system at station 1 installed; designing and building the Kubota RTV for fighting wild land fires; acquired the new water tender; upgraded the power service and purchased the stand-by generator at station 1; replaced about half of the department vehicles, including three ambulances; upgraded all the medical and firefighting equipment, including the newest generation SCBAs (self contained breathing apparatus) in all three engines, medical monitors and I Pads in the ambulances.

Farmer, with the help of a great crew he said, improved the department’s medical program reputation, decreased response time and improved overall service to the district. Farmer has seen an increase from 70 calls per year to around 200 calls per year, he said.

Farmer is leaving the department in good shape. Stahly has big shoes to fill, but has some goals of his own. He would like to get a satellite station built on Park County Road 71. The district covers 242 square miles, and it would be good to have a station on that northeast side.

Stahly would also like to have a wild land firefighting unit which could go out to other fires in the state and bring some welcome revenue into the department. He would like to recruit members from Colorado Springs, Woodland Park and other areas outside the district for this crew, he said.

Of course, Stahly is looking for volunteers for this district, as well.

“It has been quite the journey, but I absolutely love living in the mountains of rural Colorado and am grateful for the opportunity to serve the community,” Stahly said.

Come by the station in Guffey to meet the new chief, learn about the fire district or to volunteer any time during business hours Monday – Sunday 9 a.m.- 3 p.m.

If they are not out on a call, someone there should be there.

The Flume is looking for an Advertising Sales Rep

The Flume is looking for an Advertising Sales Rep