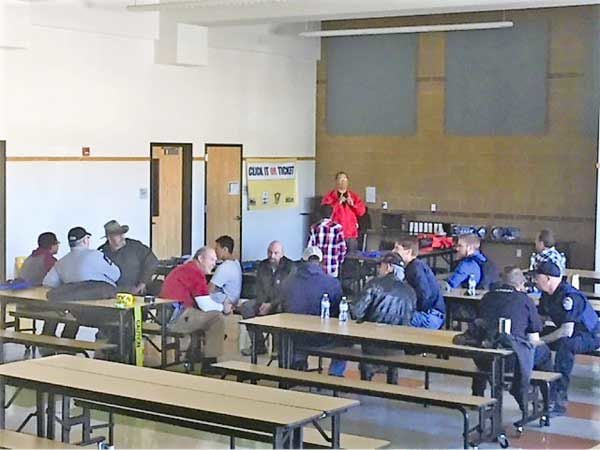 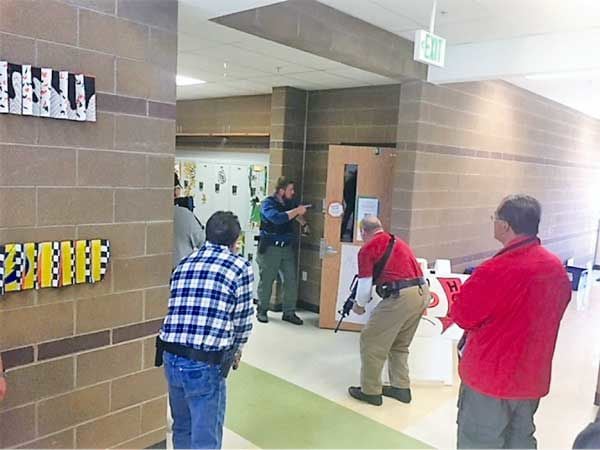 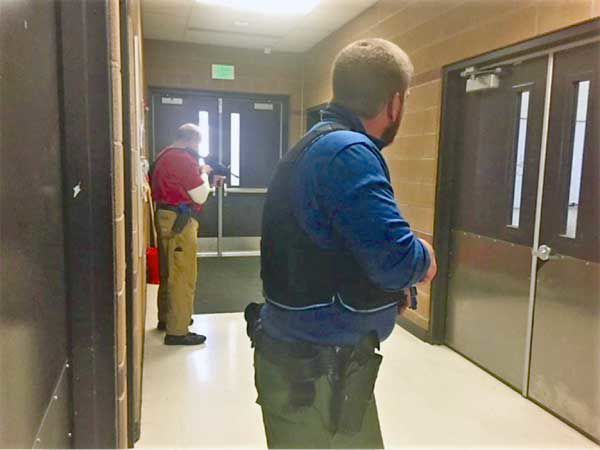 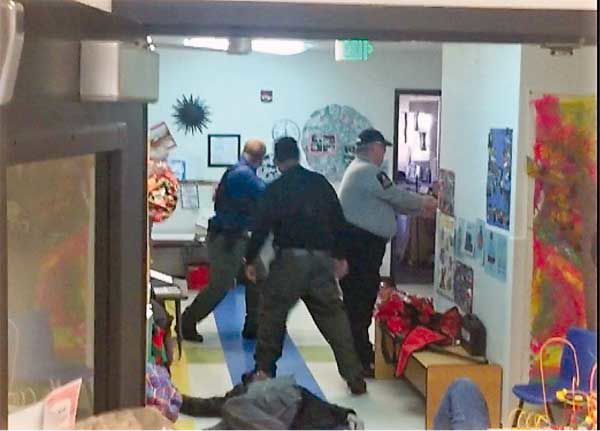 Below, officers were required to use shoot/don’t shoot training to determine whether volunteers were assailants or innocents through a fast-paced, decision-making scenario. 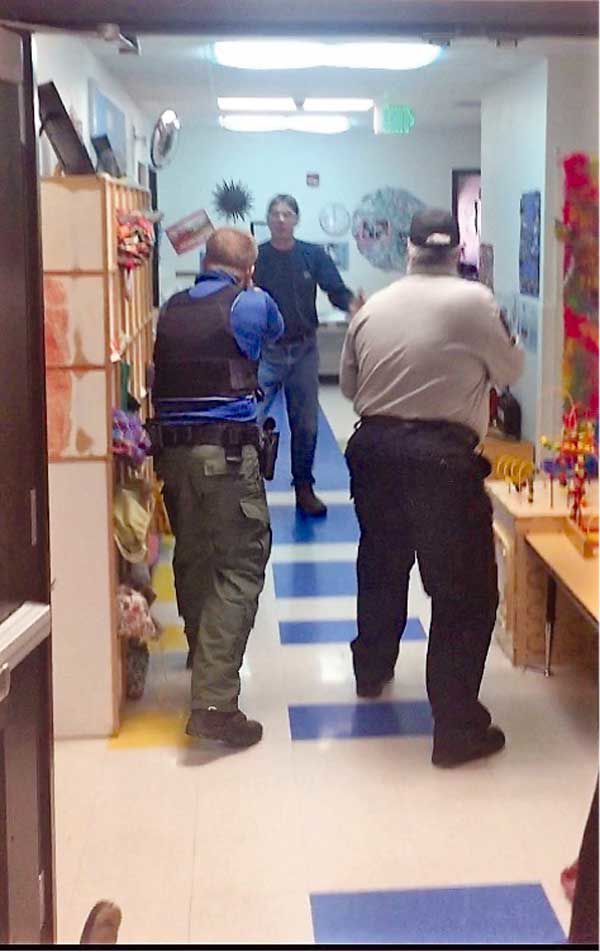 Above, Chip Wittbrodt (center) plays role of man with a boxcutter attempting to confront Park County deputy and Alma police.

Below, officers were required to use shoot/don’t shoot training to determine whether volunteers were assailants or innocents through a fast-paced, decision-making scenario.

Above, Chip Wittbrodt (center) plays role of man with a boxcutter attempting to confront Park County deputy and Alma police.

As parents, local law enforcement and politicians discuss the safety of our nation’s children at school, Fairplay is no exception.

We all want our children to feel safe when away from home. Fairplay’s acting Police Chief Bo Schlunsen moved beyond the rhetoric, organizing an inter-departmental training exercise held at Edith Teter Elementary this past Saturday.

Fairplay’s board of trustees requested Schlunsen take on the task of coordinating a training exercise for an active school shooter. Although Schlunsen has limited manpower at this time, he did not hesitate to make our local children a priority.

Torrez, a former chief of police with more than 30 years in law enforcement and training, started off the morning with officers and paramedics, discussing their experience, roles in the community and current protocols.

As volunteers from the community arrived, including Fairplay’s Mayor Pro-Tem Frank Just, we all gathered for introductions and an overview of the day’s schedule.

This exercise reflected professional and personal importance to us all, especially as three RE-2 district students were also volunteers.

Torrez provided a variety of safety gear and training weapons, some emitting only a puff of air, while others would be loaded with non-lethal simunition.

Simunition is a low-velocity cartridge that contains a non-toxic detergent-based and water-soluble compound that, upon impact, leaves a colored mark on the target. This allows for an interactive simulation for participants.

The exercise began with volunteers observing as the law enforcement “team” progressed down the school halls, clearing rooms as they went. Once the process was complete, volunteers were asked to hide from officers in the same areas just cleared. The officers were to locate and simulate arrest. Needless to say, I was quickly apprehended for choosing a poor hiding spot.

Volunteers were then separated from law enforcement and medical personnel. Volunteers were given specific tasks within a designated space that would provide officers and the paramedics with scenarios such as responding to an active shooter, team tactics, shoot/don’t shoot decision-making, moving targets, suicide by cop, and firing under stress.

Officers and paramedics were run through these scenarios in two-man teams and solo.

The community volunteers’ roles varied extensively from being injured, to assailants, or to bystanders simply trying to escape danger. While one may try to shoot or physically attack the officers, another may be running toward officers with hands in the air.

My roles throughout the day went from a bad guy with a gun trying to shoot an officer, to an injured officer begging paramedics to take my gun to protect the children, to a violent estranged wife of a teacher.

As I yelled and attacked my future ex with a non-lethal shockknife during one scenario, I was to be apprehended. Due to my scripted aggression, I was shot multiple times with the simunition over the course of this exercise, with all hitting my protective gear except two rounds.

These two rounds instead made contact with my sweatshirt, causing impact marks on the fleshy part of my side. I will admit, they did sting and I have welted bruises from them, though only my pride was actually injured.

At the end of the day, still full from Java Moose’s donated St. Patrick’s Day lunch of lasagna, salad and green cupcakes, we debriefed.

Our officers, with years of experience and training, talked about things they could have or should have done differently, and additional training exercises they would like to participate in.

The gallant paramedics, who were thrown out of their already stressful roles, talked about what they had learned from Torrez and the other officers, and asked to participate in future training opportunities.

Should an officer be injured or killed in the line of duty, medical teams may be the last line of defense to protect the innocent.

The remaining volunteers expressed gratitude and appreciation for the impact this exercise had on them, providing insight into what an officer may face going into a call, especially one that may quickly escalate into violence.

Speaking for myself, I am grateful for the opportunity to have participated. As a reporter, it was important to know and advise our community what is being done locally to address the safety of our children.

On a personal level, having substituted at Edith Teter Elementary and having a daughter in college several states away, I can only hope that all communities are making the same effort as Fairplay.