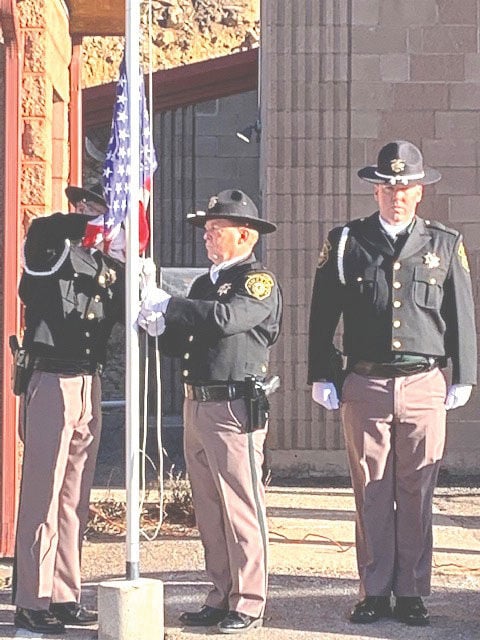 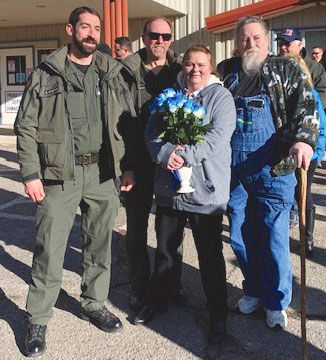 But no matter how people happened to have known Carrigan during his life’s journey, they seemingly remember him fondly, without exception.

Evidence of that was on display again Feb. 26 at the Park County Sheriff’s Office Substation in Bailey, where local residents filled the parking lot for the annual Nate Carrigan Remembrance Ceremony.

The annual ceremony was the brainchild of Park County Sheriff Tom McGraw, who initiated the event shortly after he was elected. Since that time, PCSO has also initiated scholarships for high school students throughout Park County in Carrigan’s name, as well as an annual golf tournament to honor Carrigan and his family.

Most recently, PSCO announced the Corporal Nate Carrigan Community Champion Award, to be presented annually to a member (sworn, civilian or volunteer) who “personifies community involvement and exemplifies character, leadership and a sense of caring and responsibility for others.”

PCSO Undersheriff Steve Spodyak officially announced the initiation of the new award in his former colleague’s name, and, as he has done annually since the passing of his lifelong friend, gave a brief but heartfelt presentation recalling a few of his favorite Carrigan-related memories.

Spodyak described Carrigan’s remarkable physical strength and recounted an incident in which Carrigan removed a driver from a wrecked automobile. Carrigan mentioned to Spodyak after the incident that he had to bend the steering wheel back to remove the driver.

Spodyak later examined the vehicle and described his findings to the large crowd on hand.

“The steering wheel was completely peeled back, and the wheel itself was bent in a way that didn’t even seem possible,” Spodyak said. “Nate was just a remarkably strong man.”

Spodyak also spoke of Carrigan’s tireless commitment to his community and recounted his involvement in countless local projects and organizations.

Spodyak’s comments prompted several others to take the podium and to relay fond recollections of Carrigan’s courageous spirit and remarkable physical strength.

One of Carrigan’s former PCSO colleagues recalled another incident in which people were trapped in a wrecked vehicle and someone among the first responders requested jaws of life-type tools to remove a jammed door.

In the meantime, Carrigan apparently decided it was best not to wait.

“Shortly after that, Nate walks up with the door in his hands,” he said.

In yet another incident recounted by a former colleague, a suspect took off running out of his house and gained the advantage of a significant head start in the process.

“Nate came out the door behind him and I have never in my life seen a man that large move that fast,” the speaker said. “Nate caught him from behind and took him down so fast that I honestly just couldn’t believe it.”

It’s not surprising to those who knew Carrigan that he was among the first men in on Feb. 23, 2016, when PCSO members stormed the residence of an angry, well-armed suspect. According to all accounts, the bravery and selflessness he exhibited that day were typical of Carrigan – never hesitating to give of himself for the benefit of others.

The Feb. 26 ceremony also included an appearance by the Jefferson County Sheriff’s Office Color Guard, which formally led in the national anthem with the American flag at half-mast outside the substation.