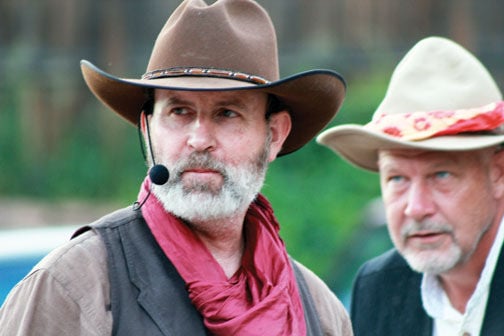 Jim Myers (left) and Tim Gregg (right) perform a western reenactment skit at Bailey Day June 27. Myers accidentally shot Gregg non-fatally in the groin last Sunday during a performance in Hartsel. The gun used by the cast member of Myers’ Marauders had live rounds in it, unbeknownst to Myers. (Photo by Emily Clingman/The Flume) 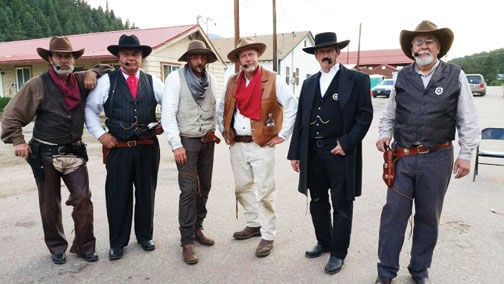 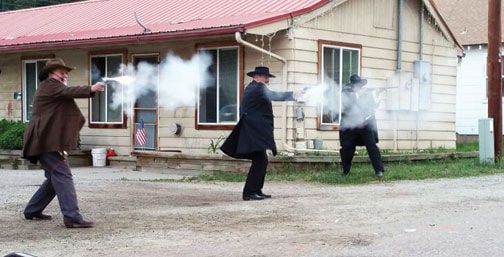 Jim Myers (left) and Tim Gregg (right) perform a western reenactment skit at Bailey Day June 27. Myers accidentally shot Gregg non-fatally in the groin last Sunday during a performance in Hartsel. The gun used by the cast member of Myers’ Marauders had live rounds in it, unbeknownst to Myers. (Photo by Emily Clingman/The Flume)

Live rounds were accidentally shot during a western reenactment performance by Myers’ Marauders Sunday, Aug. 2, during Hartsel Days, injuring one of the cast members.

Timothy Gregg, 54, was on the receiving end of a non-fatal bullet to the groin, shot by Mauraders’ leader James Myers, 53.

Myers claims he was unaware there were live rounds in one the two .45 colt revolver replicas he had on his person for the show, according to an incident report compiled Aug. 3 and made available to The Flume from the Park County Sheriff’s Office.

Myers stated in the report that the guns were normally stored in his home in a hard case and were hardly used, except for reenactments. He picked up the case without inspecting it, he told sheriff’s deputies. He also stated that he failed to follow the team’s normal safety protocol.

“When I went to load my first gun, I saw that it was loaded already and the rounds looked like one of the blanks we use (brass),” the incident report read. “For some insane reason, I did not pull one out to inspect it, as I would have immediately realized I had live Hornady .45s loaded.”

Myers also speculated, as stated in the report, that two to four live rounds were fired into the air from his gun during the event’s parade earlier in the day, before the Marauders performed.

Myers was unaware during the performance that Gregg had been hit. It wasn’t until midway through the show that Gregg informed Myers, according to the report, that there was a problem.

“Gregg lifted his shirt and said, ‘I’ve been hit with something out of your gun,’” Myers told the police.

Gregg insisted to Myers that he was OK and that the show should go on. The report states that Myers said, as written in the incident report, “I said we should go to the ER and call Fred Wegener.”

The team did not do either and instead continued the show. When the performance was done, Myers and Gregg inspected the area and realized that a live bullet hit the ground first, then ricocheted up to hit Gregg in the groin.

“We saw on the ground where the bullet had struck before it bounced,” Myers stated to deputies.

Directly after the show, the two went back to Bailey, their hometown, and at 5:03 p.m., a call came into dispatch the Gregg and Myers were at the Platte Canyon Fire Station seeking medical attention for Gregg’s wound. Park County Sheriff’s deputies arrived on scene and Gregg stated that he was going to be OK and showed the officer the projectile that he dug out of the wound with his finger, according to the incident report. They were then released to seek medical attention at Swedish Medical Center.

The Sheriff’s Office has charged Myers with prohibited use a weapon, a class 2 misdemeanor; and reckless endangerment, a class 3 misdemeanor. According the incident report, the sheriff’s office consulted with District Attorney Amy Wren who instructed the office to press the charges “because of the reckless manner these weapons were handled and the substantial risk to bodily injury to the general public.”

Myers was summoned Aug. 4. He is scheduled to appear in court Oct. 13.

The Flume contacted Myers and Gregg and both declined to comment for this story because the case is under investigation.

Undersheriff Monte Gore said that an assessment of the situation should have been done immediately and reported to the authorities.

He also stressed the importance of gun safety in situations like this.

“People reenact gun fights all the time,” Gore said. “The key to safety is to make sure to check, double check and recheck.”

Western reenactment shows in Park County are not regulated or supervised by authorities, though Gore said if the community feels a need for regulations, county and municipal leadership can make that happen.

“The responsibility should be placed on the group,” Gore said. “Use a buddy check or designate one person to oversee safety. There should be no live ammunition on their person during the reenactment, not even on their belt. Eliminate the possibility for mistakes.”

Brian Wilson of Wilson Law Office in Bailey has been retained by Myers. Wilson said he could not comment on the specifics of the case – he was waiting on the report from the sheriff’s office. He did say that he would likely request a pretrial conference immediately.

Wilson, a sort of reenactment actor himself – he plays a 15th century soldier at the Colorado Renaissance Fair each summer – uses real steel swords and full amour in his performances.

“It’s about safety, yes,” Wilson said. “But, there’s also an assumption of risk that participants in activities take on.”

(The Flume did not identify Myers and Gregg to Cashman during the phone interview. Cashman was speaking generally about gun safety.)

“But, accidents happen,” Cashman said. “More people are accidentally shot each year with unloaded weapons, and by that I mean people thought they were unloaded.”

He said one way to avoid mishaps is to treat every gun as it’s loaded and never point it at anyone you’re not intending to kill.

“Reenactments are a bit different though, they are more dangerous,” Cashman said. “which is why those involved need to be more diligent.”

When asked if he thought more regulation is needed for gun owners because of situations like this, he did not agree.

“It would be like punishing everyone who has a driver’s license because one person recklessly caused an accident,” he said.

There’s no official rule book for street performers that use firearms in their shows. It’s up to the individual groups to come up with safety procedures.

Gold Canyon Gunfighters from Colorado Springs has been in existence since 1968.

“When we do our blank loading (in the gun), we do it as a group of five or more people,” Juzwiak said.

Faler maintains the ammunition. He brings it to the sets.

“We check the guns before we load, after the presentation we check that the guns are unloaded. Every gun being held right now is unloaded,” Faler said.

The Gunfighters work a minimum of 13 feet from a crowd or a 13 feet perimeter when audiences are surrounding them. They set up a perimeter tape to isolate the audience from the actors.

(The perimeter of protection that the Maruaders used during Hartsel Days was not specified in the police report.)

They use 26 grains of powder or a black powder substitute (Marauders report using 18-25 grains) in a shell casing and a green floral Styrofoam as the plug. The floral Styrofoam plug burns up with in 13 feet of the gun. They have tested this against a white sheet to see at what distance the plug burns up.

“If we use shotguns, we double that distance,” Faler said.

Between shows, guns are stored away in hard shell cases and under the supervision of the gun wrangler. No member of the Gunfighters walks around between shows with their weapons.

No need for knee jerking

The Flume contacted Senator Kevin Grantham for his take on the incident.

“First of all, as is any case like this, thank God he’s okay,” Grantham said about Gregg. “It was an unfortunate accident.”

“Every time we get in a car, we risk our lives,” he said.

While Myers’ failure to practice standard safety procedures during the Aug. 2 show could prompt a gun safety discussion, Grantham does not feel like the situation should impede on the citizens’ right to keep and bear arms.

Even if there was the potential for someone to be injured far worse than Gregg or even killed, The Flume asked.

“That might be a legitimate argument,” Grantham said. “But there’s no point in dwelling on a hypothetical situation. Knee jerk reactions, such as implementing more gun control only infringes on law-abiding citizens’ rights. It’s more hoops to jump through to for them to purchase and use guns.”

Grantham also said that gun ownership in rural areas is an added measure of protection against wildlife and intruders, saying that there’s a time and place for guns to be used as deadly weapons.

While Myers was unable to comment directly to The Flume for this story, he did take responsibility for his actions Aug. 2 as stated in the incident report from the sheriff’s office.

“Again, had I asked my teammates to inspect the guns,” Myers told police, “we would have avoided this accident.”