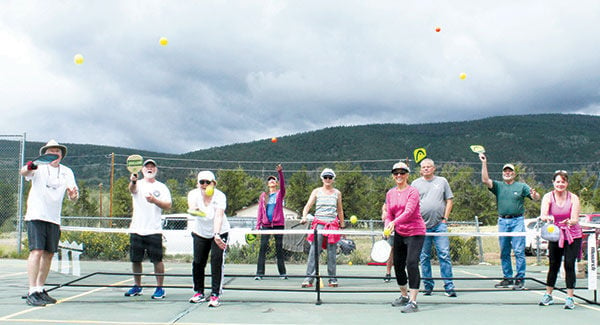 The entire Warm Springs Ranch Pickleball Group takes a moment to clown around for the camera Saturday beneath treatening skies. (Photo by Kelly R. Kirkpatrick/The Flume) 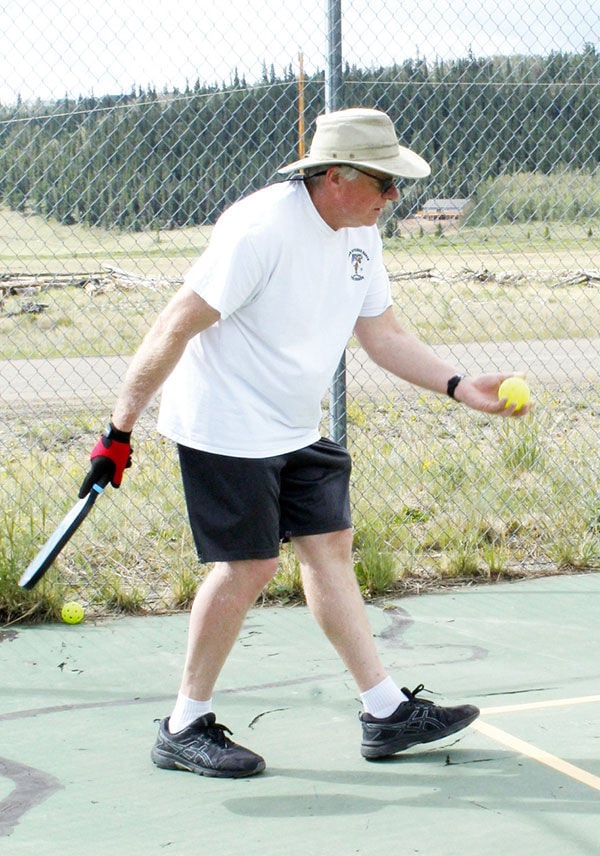 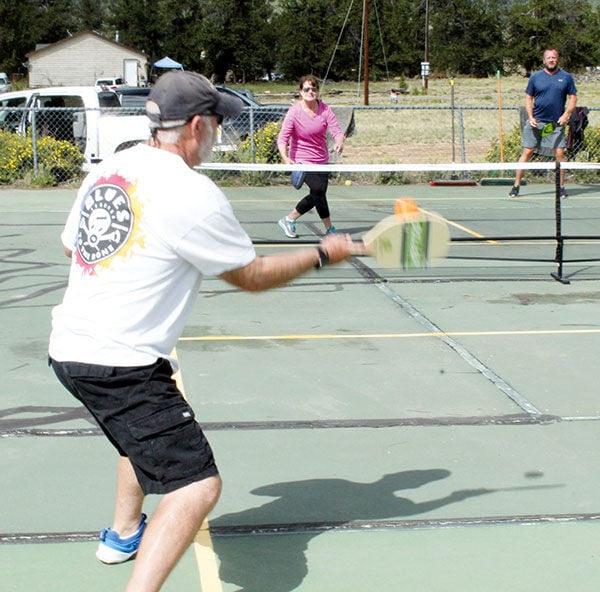 A little mobility doesn’t hurt, but anticipation and shot-making are the earmarks of experienced pickleball players. (Photo by Kelly R. Kirkpatrick/The Flume) 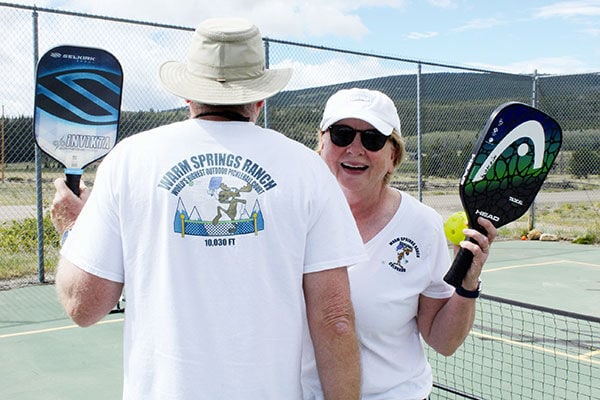 Rick Starkey and Carrol Lundin show off the group’s new T-shirts, front and back. More T-shirts might be required, however, because the number of Warm Springs Ranch residents interested in playing pickleball continues to swell. (Photo by Kelly R. Kirkpatrick/The Flume)

The entire Warm Springs Ranch Pickleball Group takes a moment to clown around for the camera Saturday beneath treatening skies. (Photo by Kelly R. Kirkpatrick/The Flume)

A little mobility doesn’t hurt, but anticipation and shot-making are the earmarks of experienced pickleball players. (Photo by Kelly R. Kirkpatrick/The Flume)

Rick Starkey and Carrol Lundin show off the group’s new T-shirts, front and back. More T-shirts might be required, however, because the number of Warm Springs Ranch residents interested in playing pickleball continues to swell. (Photo by Kelly R. Kirkpatrick/The Flume)

When Barb King suggested The Flume do a story regarding a pickleball group at the Warm Springs Ranch south of Fairplay, it sounded intriguing.

“We have a group of about twelve people who play twice a week, and we think we might have the highest-altitude pickleball court in the nation,” King said proudly. “The game is simple to learn, and our group members range in age from mid-50s to mid-70s.”

King, who acts as the marketing manager for the Warm Springs pickleballers, said the group would meet at 9 a.m., just as it does every Saturday, on the courts at Warm Springs Ranch.

I told her I would be there in hopes of introducing readers to the game and spreading the news about all the fun they were having.

Upon my arrival, the group’s designated “Commissioner,” Rick Starkey, met me with an enthusiastic COVID-19 elbow-handshake as soon as my feet hit the ground.

“Hey, thanks for making it out,” Starkey said. “Most of the group has played tennis or racquetball before, but many in the group had never played pickleball until very recently. The game is simple to learn. Let me explain it to you.”

There were a couple of concepts that required further explanation, but for the most part, as promised, the rules of the game were extraordinarily simple.

Much like doubles competition in tennis, the game requires players to return the ball in play after no more than one bounce. Serves are rotating, and they too must land in play on a designated portion of the returning team’s side of the net.

There were three rules, however, that required me to take special mental notes. The serve has to bounce once before being returned, as does the serving team’s first return shot in the volley. In other words, you must allow the ball to bounce once during the opening three shots of the volley – the serve, as well as the next two shots.

Secondly, you cannot step into what is referred to as the “kitchen” once the volley has begun. The kitchen runs the width of the court, parallel and adjacent to the net, and extends about four feet deep onto both sides of the court.

And finally, the server is obligated to state the score, as well as his service number, either one or two, for all to hear prior to serving.

I felt like I had a firm grasp of the rules at that point, thanked Starkey for the overview and readied my camera to get some action shots of the club members.

Without being able to conjure up any legitimate reason to decline the invitation, I put the camera away, clumsily grabbed a racket and reluctantly took the court alongside my capable partner.

Prior to taking the court, Starkey, 65, casually mentioned that he was once among the top racquetball players in Colorado.

“Wow, that’s pretty impressive ... I played quite a bit in college,” I responded sheepishly.

I quietly calculated that a little more than three decades had passed since the last time I played.

Even so, Starkey and I managed to win our first match due largely to his uncanny shot-making abilities. He hit high, arcing lob shots to disrupt the rhythm of volleys, spun the ball away from opponents on sneaky, unreturnable short shots and generally placed the ball where ever he wanted from almost any location on the court.

“Kelly, tell me you aren’t breathing hard already,” Starkey said with a wink midway through the contest.

I was breathing heavily. I was also sweating profusely. I proceeded to make a number of rookie mistakes, each of which were met with gentle constructive criticism from Starkey.

“When I’m serving you are back here with me, not setting up near the kitchen,” Starkey said repeatedly. “And when we are returning serves and you are the returning player, don’t sit back there after the return. Get to the line and help me defend. And remember, you need to state the score and your service number before each serve. That’s something we are all required to do.”

“There are no sorrys in pickleball,” Starkey said while making his way to the service line.

Those same mental mistakes on my part, and that same constructive criticism from Starkey, were repeated countless times during our grueling but glorious one-point victory.

Games conclude when one team reaches 11 points. The winning team does not have to win by two, like in tennis, which I was quite pleased to learn.

We’ve probably all seen tennis matches that continue for hours because neither player can obtain a two-point advantage to seal the match.

I wanted no part of such a scenario in the thin air of Fairplay, and recall verifying that the match would end without qualifications of any kind once either team reached 11 points.

Brimming with pride over our victory and pretending not to be completely exhausted, I snuck back over to my camera. After a couple of action shots, the “Commish” enthusiastically inquired if I was ready to play again.

“Oh no, he’s really not kidding,” I thought. “Don’t these people know that we are playing at extremely high altitude here? Are they all endurance athletes or something? Am I the most out-of-shape person in Park County? Are they really all younger than they say?”

Being one of the youngest participants on the court, and noting that some players were competing in their fourth or fifth games for the morning and still appeared amazingly fresh, I naturally lied and said, “You bet, partner. Let’s go get another win.”

The courts at Warm Springs Ranch are situated at 10,030 feet above sea level. Trying desperately not to let my own fatigue show, I grabbed Starkey’s spare racket and took my assigned place on the court. Sort of.

“Kelly, I’m serving, so you are back here with me this time,” Starkey said as I scrambled back to my correct pre-serve position – yet again.

After costing my team several points for not allowing the ball to bounce on opening volleys, we quickly fell behind.

The nets, I noticed, were no more than waist-high. But they suddenly seemed higher when attempting to slip subtle drop shots just over the top of them. I proceeded to hit about four shots into the net while making those astute observations.

“That’s just rediculous to hit the ball back into the net over and over,” I thought to myself. “I’m not doing that any more. I’m better than this.”

After overcorrecting and promptly blasting my next three or four shots deep and out of bounds, it became obvious that not even the slick play of Starkey would be enough to bail us out this time around.

“That’s okay … win some, lose some,” Starkey said with a reassuring smile.

Secretly stunned and emotionally shaken by how many unforced errors I committed, and knowing I had just saddled my team with a lopsided loss, I quietly retreated back to my camera. I used my shirttail to wipe perspiration from the lens, which was pouring off of me in buckets.

“You know I also play in Arizona for much of the year,” King said as she waited for her next game. “We have many players there who still play well into their eighties. It’s a wonderful game in the way that it doesn’t take the toll on you that tennis or racquetball might.”

“You don’t say,” I responded between breaths. “That’s remarkable.”

I contemplated playing pickleball in my eighties as I captured a few more action shots of the group.

“That would be an unlikely proposition at best,” I mused. “I should definitely exercise more …”

“The truth about pickleball,” I declared to Starkey, “is that it is really easy to learn.”

I somehow made that bold assertion despite needing constant reminders to get into proper position and repeatedly forgetting to let the ball bounce once on opening volleys.

Starkey was probably wondering how long it would take me to digest more complex games like chess, bridge or even cricket. Nevertheless, I continued making my point while Starkey patiently listened.

“A second reality about pickleball is that it’s not so easily mastered.”

“That’s well stated, Kelly,” Starkey replied. “Why don’t you come on back next Saturday. You’re always welcome, and I’ll bet you are already hooked.

At that particular moment, I was honestly too physically whipped to feel hooked on anything other than maybe an oxygen machine.

I playfully wondered if Starkey would place me on an opposing team next time rather than having to babysit his wayward partner between virtually every volley.

After graciously posing for a few final pictures, the entire pickleball group wished me well and shuffled back onto the courts with childlike zest.

Concerned that I might be invited to play yet another game, I opted to save myself the potential embarrassment.and expense of an ambulance trip to some distant county –or even worse, to Denver.

“I’d love to stay and play more if not for a previous family engagement,” I falsely stated while lumbering back to my car.

I utilized my air conditioner for the first time this summer on the short trek home to Shawnee. I vowed to exercise more often, and thought about how nice the Warm Springs Pickleball Group had been to welcome me as readily as they did.

Most of all, though, I promised myself that I would be a much more proficient pickleball partner starting next Saturday at 9 a.m. sharp.

I should probably call the Commish to make reservations and to admit that I, too, am unapologetically enthralled and hopelessly entangled in the irresistable wave of Pickleball Mania currently sweeping through Warm Springs Ranch.

At a bare minimum, I am determined to at least remember to state the score and my service number with clarity and conviction before each serve next time I play.

After all, it’s something all pickleball players are required to do.