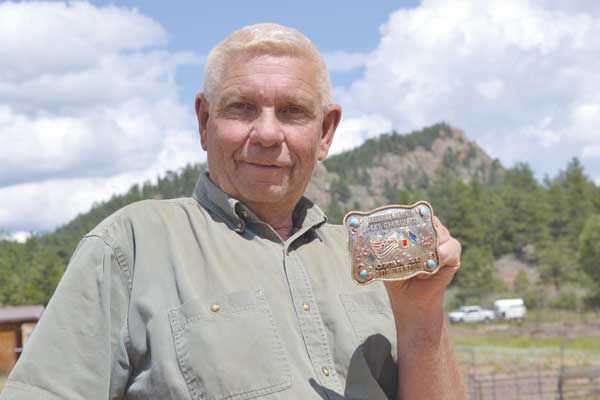 Steve Plutt shows off one of the belt buckles to be awarded in September. (Photo by Marianne Mogon/The Flume) 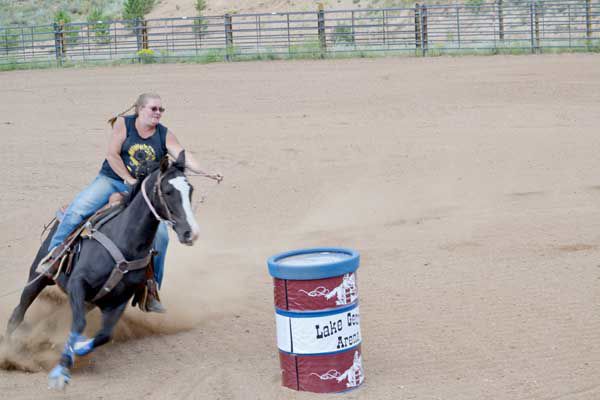 April Achord and Duke round the second barrel. (Photo by Marianne Mogon/The Flume)

Steve Plutt shows off one of the belt buckles to be awarded in September. (Photo by Marianne Mogon/The Flume)

April Achord and Duke round the second barrel. (Photo by Marianne Mogon/The Flume)

The American Mountain Summer Buckle Series in Lake George has been hosting barrel racing events for three years at Lake George Arena in Lake George Community Park off U.S. Highway 24. The producers are Lake George Community Association. Steve and Kim Plutt run the events, assisted by other volunteers in the community. The competition is held every other Sunday from May to September. The entrants in the Open and Novice divisions accumulate points through the season, and the high point winners are awarded beautiful belt buckles at the end of the season.

There is an average of about 45 entries per race, which includes the Open, Novice, and Pee Wee divisions.  The Pee Wee division is for kids 10 and under. Novice is for those just starting in the sport, and in the Open division, the entrants are usually well-seasoned barrel racers who are professionals, and most compete in several races per week. On Sunday, July 28, there were 55 entries. They also have exhibitions, by racers who want to practice running the barrels. This is usually for inexperienced horses or to “warm up” the horse for that day’s race. On Sunday there were about 50 of those runs.

At the end of the season, accumulated points are tallied, and four belt buckles are awarded in the Open division, and one for high points in the Novice division.

The Lake George Community Association maintains the park, acquiring the money needed for improvements and new additions in the park, such as hiking trails, warm-up arenas, twenty-hole disk golf course and tennis courts. Steve and Kim Plutt and Shelly Achord have been on the park board for over 20 years. There are eight board members, but the Plutts and Achord are the only ones who deal with the barrel races.

“The barrel races started in the summer of 2017. We of the park board were asked at the time by several local girls if we could start a program. We as a board talked it over and decided to do it, and now it is a quite successful program. Girls haul from all over the Front Range of Colorado to get here, some as far as three hours away. We really get a lot of compliments for the great arena and how well it is cared for, the beautiful scenery and the cool temperature compared to down on the flat lands,” explained Steve Plutt.