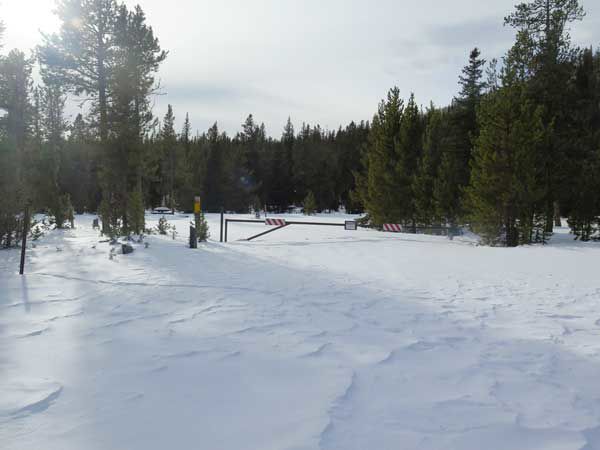 This Forest Service gate blocks cars and trucks from attempting the snow-covered road up to Jefferson Lake. There is ample room to the left for a snowmobile to get past to look for a Christmas tree. (Photo by John D. Rankin/The Flume) 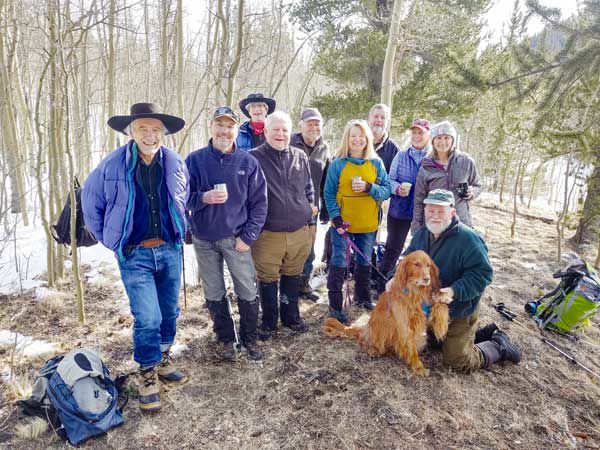 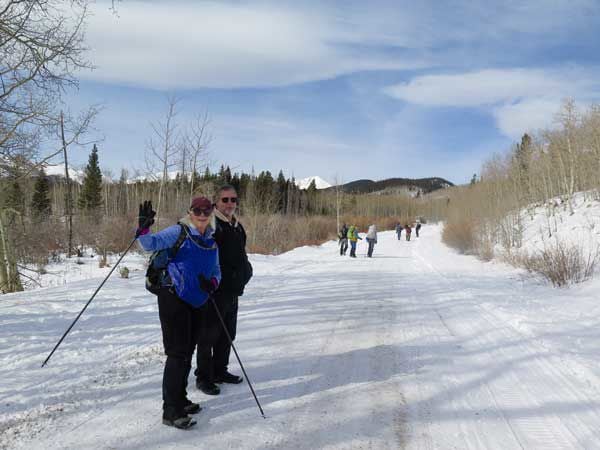 Mount Guyot’s snowy summit is in the center distance. Closer to the camera are Misi Ballard, left, and Jim Glenn, behind some of the group but in front of the rest. (Photo by John D. Rankin/The Flume)

This Forest Service gate blocks cars and trucks from attempting the snow-covered road up to Jefferson Lake. There is ample room to the left for a snowmobile to get past to look for a Christmas tree. (Photo by John D. Rankin/The Flume)

Mount Guyot’s snowy summit is in the center distance. Closer to the camera are Misi Ballard, left, and Jim Glenn, behind some of the group but in front of the rest. (Photo by John D. Rankin/The Flume)

With every hike I take, I start out with a goal: reach the top of a given peak, walk the length of a trail, bushwhack around a mountain. Then there is the unspoken goal of every outing: have a good time.

Years ago fellow hikers and I started a tradition that takes place each December on or near the Winter Solstice, the shortest day of the year. We head out into the woods to a predetermined location, and have a wine and cheese party.

Most of the celebrations have turned out well. In order to accommodate folks coming from the metro Denver area, I try to pick a place around northeastern South Park, like Kenosha Pass, or near Tarryall Reservoir.

Chosen locations haven’t all been good. One memorable place was Limber Grove. It’s on the west side of South Park, the traveling distance being a strike against it. But the weather was the killer: temperatures in the low twenties or high teens, and brutal wind blowing snow. Dave Cooper brought a stove and cheese fondue. It was the only time I’ve seen fondue get colder once it was put on the stove.

Looking through photographs of hikes I’ve taken, I decided that Jefferson Lake would make a nice setting. There was a possibility of blowing snow and cold, but there were sheltered valleys nearby for alternative destinations.

Our actual date was Dec. 22, the day after the Winter Solstice, but close enough. John Flory and Pete Skaates drove up from Denver and picked up Jim Glenn and me. Then we drove to Jefferson to meet the rest of the group.

We found Dave waiting for us, with Ginni Greer, and other Alma-area folks, Bob, Mark and Jan, with Murphy the Irish setter. Misi Ballard was also there, fussing with things in her car and waiting for husband Bob.

Bob soon arrived, we shook hands and made introductions or hellos all around, then piled in the cars and headed north from Jefferson on County Road 35.

We had a good winter’s day. There were high, thin clouds, and a light breeze from the south, not a South Park windstorm coming over the divide from the northwest with a foot of snow in its wake.

We took CR 35 north to the junction with CR 54 and CR 37, and turned right on 37, following the sign to Jefferson Lake. At the base of Jefferson Hill there’s a T in the road, with a Forest Service road headed east around the hill to Deadman Gulch, site of a previous wine and cheese, and a foul-weather alternative. To the west there was a bit of a parking area, and a gate, closed to keep traffic from going to Jefferson Lake.

Several pickup trucks were there, some with trailers for towing snowmobiles. These folks were there with Christmas tree permits, not to hotdog around in the snow. That was a relief to us.

There was a smaller, open gate by the one closed across the road, wide enough to let the snowmobiles pass. We all gathered up the wine and cheese we’d brought, and went through that gate.

The road had been plowed, even past the gate, for a quarter mile or so. The plow had left enough snow that the snowmobiles had no problems, and it was easy going for us. After that plowed bit, the snowmobiles had packed down the six or eight inches of snow, so we didn’t have to break trail. Of course, each of us had to find the best-packed path on the road.

Murphy was given free rein, or, actually, no rein at all.

After a mile and a quarter, Dave got tired of trudging, and got out his GPS. “John!” said the Englishman, “it’s 6000 meters to the lake!” Translating to American, that’s 3.7 miles. My recollection needed recollected, it seems.

We all decided that we were as close to the lake as we were going to get, and looked for a spot for the soirée. Off the road on the sunny side was a snow-free area, so we headed there.

Cookies, brownies, hot chocolate and baklava, not to mention wine and cheese, all was spread out on the ground, and poor Murphy was tied to a tree lest he get his nose into the various offerings. Each of us filled a cup with some liquid refreshment, and we drank to the time-honored Winter Solstice toast: “Before we tell tales about the trails and mountains we’ve seen in the past year, we toast the trails and mountains we’ll see in the year to come!”

With that, we chatted happily about those trips we’d taken, and plans for the coming year.

After much chatter, many goodies and ample beverage, we decided the party had run its course. Usually we go on a walk off-trail after eating our fill, but this year we decided the walk back would be long and hard enough.

The remains of our repast were picked up, Murphy was set free, and we headed back down the road. If anything, the trip back was harder than the one in, as the weather had warmed, and the snow was softer underfoot than it had been before.

Like many forays into the woods, the day didn’t go as planned. But I learned many years ago to take what comes and enjoy it while I’m in it. Whether a trip goes as planned or my snowmobile breaks down, I’m out in the woods with having a good time as a goal.

It don’t get no better than that.