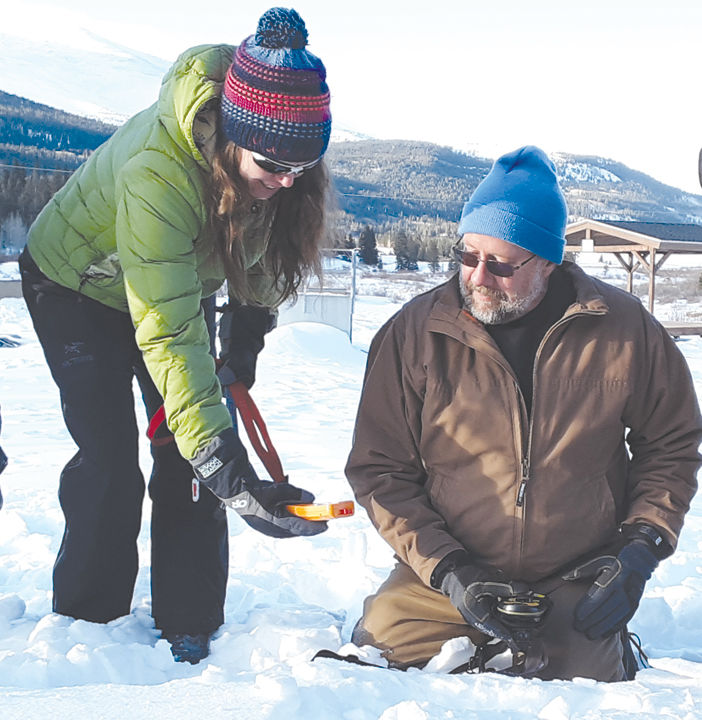 Kristen Meyer (left) and Dean Butler successfully use their beacon the locate a signal well below the snow’s surface outside the Alma Town Hall Jan. 10 as part of an avalanche safety workshop conducted by the Park County Search & Rescue team and sponsored by the Mosquito Range Heritage Initiative. (Photo by Kelly Kirkpatrick/The Flume) 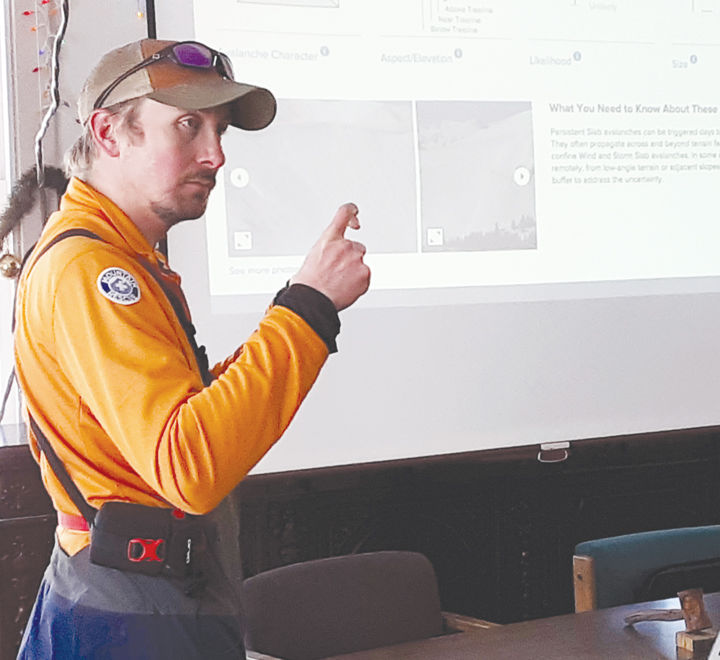 Kristen Meyer (left) and Dean Butler successfully use their beacon the locate a signal well below the snow’s surface outside the Alma Town Hall Jan. 10 as part of an avalanche safety workshop conducted by the Park County Search & Rescue team and sponsored by the Mosquito Range Heritage Initiative. (Photo by Kelly Kirkpatrick/The Flume)

Park County Search & Rescue supervisor Daniel Knudsen spoke with a sense of urgency during a Jan. 10 avalanche workshop sponsored by the Mosquito Range Heritage Initiative and held at the Alma Town Hall.

That sense of urgency stems from having been on hundreds of backcountry rescue missions where victims simply did not have the necessary knowledge or awareness to safely negotiate backcountry challenges such as avalanches.

“Last year, we had four incidents where people were buried either partially or completely by avalanches,” Knudsen explained. “In every case, the victims were rescued by people in their party. It takes us almost two hours to get the team together and to travel to a given site. So those who go into the back country had better have necessary training and education to help one another. It is essential, and sometimes the difference between life or death.”

Knudsen said that Park County has its fair share of avalanches, but that most of those avalanches occur in hard-to-reach, remote locations. Because neighboring counties such as Summit and Clear Creek have higher populations and more activity in avalanche-prone areas, their search and rescue units respond to many more snow-slide events than does the Park County team.

Remarkably, however, the Park County Search & Rescue team, comprised of 25 members, responded to 53 incidents in 2019. Interestingly, and perhaps predictably, Knudsen estimates that approximately 90% of those incidents were to assists people who do not reside in Park County.

As for tips in avoiding and surviving avalanches, Knudsen had many. The best way to access and understand the details provided by Knudsen at the workshop is to go online to the Colorado Avalanche Information Center’s site: www.avalanche.state.co.com.

The site releases up-to-the-minute forecasts for every avalanche-prone area in the state. A map on the site displays every portion of the state where avalanche danger exists, and also gives detailed information about the probability of snow slides in those areas.

The CAIC site also provides information pertaining to recent avalanches and accidents, educational information from A to Z regarding the avoidance and survival of avalanches, and much more.

Ideally, those going into high-elevation locations during the winter and spring seasons should carry avalanche beacons capable of sending out signals in the event that they are covered beneath a wall of snow. Knudsen equipped several groups of those in attendance with beacons and had them go outside to find other beacons hidden beneath the snow.

With stiff winds and temperatures hovering around 10 degrees, each team worked feverishly to locate the beacons. The process of using one of the life-saving devices is by no means complicated, but it does require a little practice and an understanding of the beacons’ capabilities and how they operate.

Most of the teams located their objectives in less than 15 minutes. The exercise was extremely informative and clearly demonstrated how to locate victims, as well as what to do once a victim is located.

Locating beacon signals is just the first step in the rescue process. Probes must also be utilized to determine the exact location of victims, and digging down to victims requires specific time-and life-saving techniques.

Perhaps just as importantly, the exercise demonstrated the challenges professional rescue teams face in such situations, and what little time avalanche victims actually have before they asphyxiate beneath the snow. As a rule, the rescue of an avalanche victim needs to occur within 30 minutes of the incident.

On May 10 of 2019, the team executed a well-documented extraction of a Lakewood couple who had been trapped in a ravine deep in the back country of Pike National Forest’s Lost Creek Wilderness.

The couple had been lost and stranded near the Goose Creek Trailhead for about 65 hours prior to their extraction by the rescue team. The entire area was under a winter weather advisory during much of that time. Remarkably, the couple and their friendly canine were able to walk out under their own power once located by rescuers.

The successful extraction required an exhaustive effort on the part of Park County Search & Rescue members and came at a cost of about $20,000.

“We were a pretty exhausted group when that one was over,” Knudsen recalled.

Park County Search & Rescue is funded almost exclusively by donations, fundraisers and grants. The unit has no paid employees. The funds they receive as donations are used to acquire and maintain their rescue/command center vehicles, snowmobiles, ATVs, repair and replace team gear (such as litters, ropes, climbing hardware, medical equipment, and radios) and operational expenses.